The Faces Behind Our On-Campus Support

By adminSeptember 13, 2022No Comments 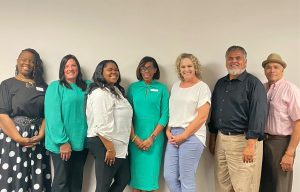 At Communities In Schools of the Dallas Region, we recognize the importance of providing leadership opportunities for our staff. Nowhere is there a better example of this pathway than in our new group of Regional Directors, who have all served in other positions with Communities In Schools, both local and afar. New to the team this year are Natasha Castille, Brashaun Cornelius, Linda Bennett, and Rey Maldonado. All of these outstanding individuals began as site coordinators with CIS Dallas, with the exception of Linda Bennett, who comes to us from CIS Atlanta. These new Regional Directors joined a tenured team, including Dionna Bozieux, Denetra Dancer, and Eduardo Pulido.

Read about each of them below to learn a little bit more about their stories!

Natasha Castille serves as the regional director for Bonham, Sherman, and Denison Independent School Districts. She joined CIS Dallas in 2021 as a site coordinator, and is passionate about her family and her work with kids. Natasha takes great pride in continuing to grow the CIS Dallas presence in the northern sector, and is beloved by her district liaisons and administrators.

Brashaun Cornelius began as a site coordinator south of Dallas in 2021, and quickly demonstrated excellent leadership qualities. Brashaun oversees Midlothian ISD, DeSoto ISD, and a portion of our Dallas ISD schools. During her time as a site coordinator, Brashaun wowed students, parents, and teachers alike with her creative methods and passion for the well-being of the kids in her program. She brings that same passion and creativity to her role as regional director, and has already grown tremendously as a leader.

Denetra Dancer, like Dionna, has been with CIS Dallas since 2008 and has held many different positions, including site coordinator and technical trainer. This year, Denetra is once again serving as regional director for Plano ISD, where she has enjoyed several years of success. Denetra is also a proud graduate of the University of North Texas, and a mom of two.

Linda Bennett is the newest to Communities In Schools of the Dallas Region, joining us from CIS Atlanta after moving to Texas this past summer. Linda is excited to be the regional director for one of our longest standing district partners, McKinney ISD. She now calls Texas home with her husband, while her two adult children attend college in the south.

Rey Maldonado has been with CIS Dallas since 1994, and will say he is the longest tenured member of the team. However, Mr. Pulido might take offense, as they started very nearly at the same time. Rey has held many positions with CIS Dallas, and is proud to represent Rains, Crandall, and Terrell Independent School Districts as their regional director. Rey is known for leading Young Men of Honor programs at several area schools, and is passionate about helping young men live up to their full potential.

Eduardo Pulido has also been with us since 1994, and returns as a regional director for Carrollton-Farmers Branch ISD and the other half of our Dallas ISD schools. Eduardo is full of passion, wit, and unique perspectives. He is incredibly dedicated to his site coordinators, sharing his years of experience with them as they strive to improve the lives of students. Eduardo is quick to tell anyone who will listen about the amazing things happening at CIS Dallas, and has witnessed many stages of the organization. We are thankful for his continued dedication!